So I was talking the other day with a lady who lives by me and she was asking me about the Evolution Hammock. I told her the price, $499, and the first words out of her mouth were, "How could a hammock ever be worth $499"?

That is a great question. When you think of a traditional hammock I can see why no one in their right mind would spend that much. But the Evolution Hammock is anything but traditional!

I figured that maybe we haven't done enough to explain what makes the Evolution Hammock so unique and worth the price. So, I'll explain. The first thing Rob and I did after returning home from our trip to Palisades, ID a couple years ago, before the Evolution Hammock was even a thought, was to Google 0 degree sleeping bags. Now, I had a very expensive 0 degree sleeping bag that I bought earlier that spring so I didn't need one, but Rob did. I did that exact same thing today and here are the Google results:

A number of options - after drilling down into a number of these bags you'll find that everyone puts their best foot forward. Here's a good example of what I mean by that...the first bag, the Patagonia 850 for $379 is actually for the short version. The regular length is $399 and the long (same length as the bag on our Evolution Hammock) is $419. So when you get down to it, to get an 850 + down fill sleeping bag (apples to apples with the Evolution Hammock) you'll spend an average of $350 to $450.

So you're thinking, I'll spend $400 on a nice sleeping bag and then $50 on a hammock and still be $50 less than the Evolution Hammock. You could do that and we tried that. I spent $425 on my sleeping bag. The challenge is the down compresses underneath you and with the cold air below you in the hammock you can get what's affectionately known by hangers as "cold butt syndrome". How do we combat that? We have to buy an under quilt.

If you Google under quilts and compare the same quality as you'll find in the Evolution Hammock's under quilt, they will run you around $200 to $300. Lets split the difference and say $250. So you now have a $400 sleeping bag, a $250 under quilt and a $50 hammock in a system that takes longer to set up than a tent! Sheesh!! This was the exact problem Rob and I faced. Why wasn't there a hammock that had all of this in one package that was super light weight and easy to set up? We couldn't find one...and that was the birth of the Evolution Hammock.

So why $499? Because we want to provide what you'll get separately for $700 in a better, easier, more convenient package. We tried to get this made in the US and it was going to cost $499 in labor alone. Our first hammock was sewn by my wife at our kitchen table from a $40 hammock off of Amazon and a $50 Wal-Mart sleeping bag. After almost a year of work and a number of prototypes (I'll take pictures of them all for a future blog post) we finally found our patent pending design that allows the Evolution Hammock to work properly. We love backpacking and being in the outdoors and now we're providing a way that we feel is simpler and easier and it makes being outdoors more enjoyable.

Thanks for catching up with us. Our second run of Evolution Hammocks are being made right now and we should have them here in time for the holidays. We have just a few left from our initial run so don't wait. They're going quick!! 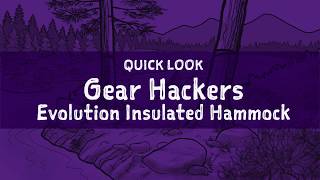 Review of The Evolution Hammock

There is light at the end of the tunnel

From China with Love...